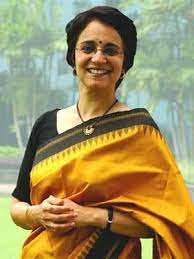 Madhabi Puri Buch has been appointed as the chairperson for market regulator Securities and Exchange Board of India (Sebi). The Appointments Committee of Cabinet has approved Buch’s appointment for an initial period of three years. She is also the first person from the private sector to head Sebi.

Puri Buch will be the first woman to head the securities market regulator, now one of the most important institutions in the financial market ecosystem. Puri Buch, who has been granted an initial term of three years, will assume charge on March 1.

Puri Buch, a graduate of St Stephen’s College & an alumna of Indian Institute of Management (IIM), Ahmedabad, Buch has three decades of financial market experience. She joined ICICI Bank in 1989. Buch had a long stint in ICICI Group and served as the managing director and chief executive officer at ICICI Securities Limited and also as executive director on the board of ICICI Bank.

She  has worked closely with Tyagi as she was the WTM between April 05, 2017 and October 04, 2021. She has handled key portfolios such as surveillance, collective investment schemes and investment management.

At the private lender, Buch worked in corporate finance, branding, treasury and loans, before moving to ICICI Securities. She headed the domestic investment bank before moving abroad, where she headed private equity firm Greater Pacific Capital. She later served as a consultant to the New Development Bank, set up by the BRICS bloc of nations.